(I need a life… sigh!  Family home soon, so making hay while they're away.  These will slow down considerably after September 1.)

What We Believe, Part 2: The Problem with Elitism


LegalInsurrection - Poland to EU: No Muslim Refugees
** This is what it looks like when a country puts its own citizens and national interests first.  Related to immigration:
90 Miles - ILLEGAL ALIEN RE-ARRESTED ONLY THREE DAYS AFTER HE WAS DEPORTED
** Don’t forget what the Left’s illegal-philia is really about (shameless capitalism – picture is from a mug with this design): 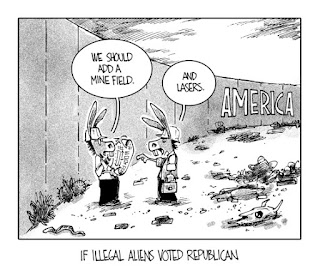 Jerusalem Post - Living with History
** Quote: “Children tear down the things they disagree with, but as grownups, that is a luxury we just cannot afford. Learning to live with history is a basic part of the human experience, and if we are becoming unable to do that, our society has much bigger problems than a few confederate statues or an upsetting flag. Our collective history is told through pain and joy, through victories and heartbreaking loss, and if we cannot keep all of it, we will end up with something much worse than nothing at all.”
>> Observant.  The Leftists are children, having a tantrum that others – i.e., those to the right of Stalin – aren’t acceding to their every whim.  It’s I want, I want, I want.  Related:

American Thinker - Christopher Columbus Gets the Sledgehammer
** The Confederacy issue is just an excuse; the real target is all of Western Civilization.  Because if that can be torn down, the Marxist Dialectic says – with “scientific confidence” – that a resulting Socialist Utopia will then arise.  These people are missionaries, with the same zeal and confidence in their beliefs as Islamic Jihadists.  More:

HotAir - New plan: let’s get rid of monuments to Columbus and… Grant?
** Quote:
“As I said, a nasty piece of business. But after all this time, do you dig up his bones and ship him out? We’ve lived to see interesting times indeed.”
>> What Grant did to Jews was a nasty piece of work.  But these people are as fanatical as the students in Mao’s Cultural Revolution, determined to scour their society (and change human nature) and expunge anything considered “impure”.  Millions died.
and
Truth Revolt - Minority Students Claim Thomas Jefferson’s Statue is ‘Emblem of White Supremacy’
** Like I keep saying, this is nothing to do with the Confederacy, and everything to do with an Orwellian purge of history. 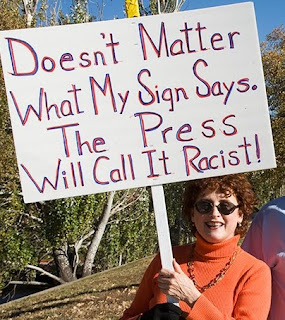 No Pasaran - "Is Trump personally racist?" asks the NYT; "The few African-Americans in his inner circle respond with an emphatic No"
** He’s an eeeeevil racist bigot because he’s not a Democrat.  Related:
Campus Reform - Clemson prof: 'All Republicans are racist scum'
** Quote:
“All trump supporters, nay, all Republicans, are racist scum,” Assistant Professor of Human-Centered Computing Bart Knijnenburg wrote in a recent Facebook post.


“All republicans? Yes,” he confirmed in the comments section. “Your complacency made this happen. Pick a side: denounce your affiliation, or admit you're a racist.”
and
Pirate’s Cove - CNN: If You’re White And Voted For Trump, You’re A White Supremacist Or Something
and
Canada Free Press - Here's a list of weapons anti-Trump rioters used to assault Phoenix police
** Quote:
“By the way, according to Howard Dean, if you’re going to vote Republican in the 2018 mid-terms, consider yourself a racist, buddy. See how this works? Violence is fine if racists are present. All Republicans are racist. Bring your own weapons.”
>> The “Othering” of Republicans.  And one more on that:
Weasel Zippers - BLM Co-Founder Compares Trump To Hitler: He Is ‘Literally The Epitome Of Evil’

LegalInsurrection - The Pepper Ball Shot Heard Round the Internet
** Is it too much to hope this is a case for the Darwin Awards?  Somewhat related:
Bayou Renaissance Man - Doofus Of The Day #972
** The problem is these people vote.  (Total non sequitur: 972 is the telephone country code for Israel.)


American Thinker – Solar Superstorms and the US Electric Grid
** Our nation (and civilization) is sustained by electric power.  If it goes, we’re in trouble.

Lights Out! The Chaos When Our Grid Goes Down | Bill Whittle

LidBlog - Democrats: The Party of Racism
** Expecting moral consistency and intellectual honesty from a Democrat is like expecting fidelity and abstinence from a hooker.  Related:
American Thinker - What about monuments that honor Nazi-lovers?
** Alinsky's Rule Four: Make the enemy live up to their own rules.  That works both ways...

Zero Hedge - New Climate Study Throws Wrench In Global Warming Debate: "Our New Technical Paper... Will Likely Be Ignored"
** I wrote about why I moved from being a Warmist to a skeptic here:
Right Way – Climate Unscience


Daily Signal - Here Are Some Key Ways the Mainstream Media Distorts the Truth
** They have an agenda; distortion, even outright lying, are permitted.  For example, Windows rotates my power-saver screen.  The latest one had something like “Only 6%-or-so of women study STEM subjects…”  OK, interesting, but what’s missing?  What’s the male percentage?  And it would also be informative to know what percentage of those starting in STEM made it through for both sexes.  But informing is not the agenda – propagandizing is.  Alarming people is.  (When confronted with virtually any statistic, from anyone, my first inclination is to ask “So, what are they not telling me?”)


Truth Revolt - SHOCK VIDEO: Student Knocks Out Teacher with One Punch
** “Wilding”.  The kid kept hitting the teacher’s head after he was out cold.  Related to education:
Christian New Wire - First-Grader Sent to the Principal's Office for 'Misgendering'
** The words "tar" and "feathers" comes to mind regarding the people who try and indoctrinate this into kids.


Spero Forum - Indictment: Election worker in Democrat county in North Carolina
** More of that vote fraud that the Left insists doesn’t exist.  And if it exists, it doesn’t make a difference.  “Come on, you can trust us!”  More:
Washington Times - Study supports Trump: 5.7 million noncitizens may have cast illegal votes

Small Dead Animals - WrongThought Detected
** You must become just another brick in the wall.  Related:
Big League Politics - VIDEO: Gays For Trump Leader Assaulted As Police Stand Down
** You will think correct thoughts or else.  But there’s a secondary consequence: if Right-leaning people start to understand the police will not protect them, they will start coming armed.  And perhaps that’s the wheels-within-wheels plan.  If Right-leaning people come armed, and are attacked, and defend themselves, that will become the 24/7 screamfest about how Conservatives are dangerous.  Remember, the Left has had decades to plan this.  Exactly related:
Gateway Pundit - Alt-Left Leader Vows to ‘Crush Skulls’ at Conservative Prayer Rally with Nail-Embedded Bat
** $1 bet: This guy carries through, gets a nice double-tap to the chest, dies… and it’ll be the victim that’s blamed 24/7 by the enemedia with gun control legislation queued up within hours.  (Because you know they've already gotten it written!  A few word changes here and there to throw in the still-cooling bodies... and it's ready to try and push through.)  More:
American Thinker - Does the Left Know Something's Coming Involving Guns?
** Quote:
“The obvious next step in the string of events being put into effect by the left is a confrontation involving guns.  They seem to want, indeed, to have foreknowledge, that someone at one of these events will use a gun, perhaps one of their own pretending to be an opponent, or maybe a bystander will be threatened and will protect himself and those with him.  Regardless, the purge of the Second Amendment will take off as never before.  Imagine the hysterical, unhinged screaming that an Alt-Right lunatic finally proved all the leftists right and took a shot.  What happened won't matter.  Truth will be rejected.  The narrative will be everything.”
>> Does it count as “paranoia” if others see it too?

Weasel Zippers - Sanctuary City Fails To Cooperate with ICE, Releases Illegal Alien Who Then Kills HIs Girlfriend
** Channeling my “Inner Viking”… is it too much to ask that this start happening to the people who want these catch-and-release illegal-philia policies? Same question applies here:
Jihad Watch - UK: Muslim migrant murdered man after Home Office repeatedly failed to deport him
** These two incidents remind me of this quote: 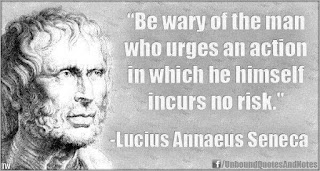 Woodsterman - I Still Have A Ton Of Libtard Stuff
** Just funny.  Closing out on a lighter note.