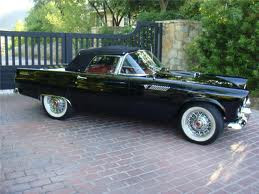 1955 Ford Thunderbird
The introductory T-Bird had style in spades, owing to its low, two-seat bodywork. (Ford pointed out in advertising that the Thun­derbird's height from the cowl to the ground was just slightly more than three feet.) It had a 102-inch wheelbase -- more than a foot shorter than a 1955 Ford sedan -- yet borrowed heavily from the many new styling touches adopted for the year's full-size Fords. The Thunderbird managed to avoid being cluttered with excessive chrome trim or outlandish two-tone paint schemes.
The power part of the equation came from the 292-cid version of the corporate "Y-block" ohv V-8 shared with Mercury. Equip­ped with a Holley four-barrel carburetor and dual exhausts, it made 193 bhp at 4,400 rpm in cars built with the standard three-speed manual transmission, or 198 bhp in those fitted with the extra-cost Fordomatic automatic gearbox. Overdrive was also available for stickshift cars.

Though it was inspired by the many -- mostly foreign-built -- sports cars that were capturing the imagination of American enthusiasts in the early 1950s, the Thunderbird was built like a little luxury car. Its family car-like suspension delivered a softer ride than "pure" sports cars (and would be made softer still in 1956). Roll-up windows and the availability of a removable fiberglass top lent more all-weather comfort than the folding tops and snap-in curtains associated with most other two-seaters. A standard telescoping steering column helped drivers find an optimal position behind the wheel. Optional power assists cradled passengers in the lap of luxury.
Story via How Stuff Works
Posted by Dave in PB at 9:16 AM 2 comments:

My Brother sends this in. It's Nephew JR's first catch this season. 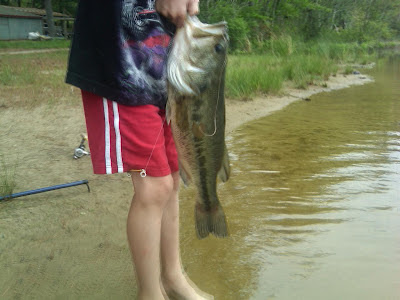 What Could Possibly Go Wrong

via Deebow at BLACKFIVE


The USS Illinois, the first Navy submarine to be staffed by an all-female crew, received the support of the White House on Memorial Day.

From My Little Town Along Beaver Brook 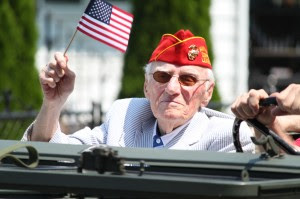 Looking Down the Barrel of a Three Day Weekend

Remember Why We Celebrate ... Ya'll Keep it Pointed Down Range. You'll be Fine. 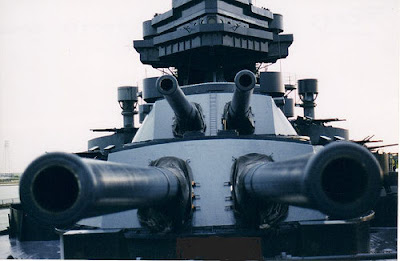 USS Texas
Posted by Dave in PB at 9:36 AM No comments: 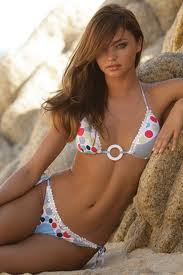 Miranda Kerr
Posted by Dave in PB at 8:54 AM No comments:

The Lefts War Against Conservative Women

via The Blaze
Madeleine McAulay, a sixteen-year-old Christian conservative from North Carolina, is speaking out today after receiving a litany of death threats and vile responses for publicly espousing her views on gay marriage.
Related Reading:S.E. Cupp, Hustler, and the four stages of conservative female abuse
Posted by Dave in PB at 9:07 AM No comments:

On the Way to the Office this Morning

The Truck having arrived just over a week ago from California. I've managed to hit every single bump in my little town. Some more than once. I'm pretty sure this old truck is going to shake to pieces some day. Having left the bunker early this AM heading south on the Highway towards the office, one of the smaller Radiator hoses sprung a leak and was leaking coolant on the thermostat housing and manifold. It looked really bad when I pulled off the road with steam pouring out from under the hood.
What I needed was a couple gallons of coolant or water and about 4 inches of duct tape. What I had was about 12 oz of water and a cloth I use to check fluid levels. With the car key was able to cut the hem off the cloth and jury rigged a small patch for the cracked radiator hose. Just as I was finishing up another car pulled off the road just ahead of me and offered a Jug of coolant and a gallon of water from his trunk. We had never met before. He was just another Joe heading into work. I asked him why he stopped to help. He said "You're TEA Party Right?" "You're Ex-Navy Right?" I responded in the affimative. "Thats why I stopped" He said, and we shook hands as I thanked him for his generosity. Really? That's what the TEA Party does for fellow patriots like themselves. That Gadsden is better than a Triple A Sticker any day.
Guess whats going in the back of the truck tonight.
Posted by Dave in PB at 11:47 AM 2 comments:

It's a pair of Tea Party Hobbits on the back stoop ... in the wild. 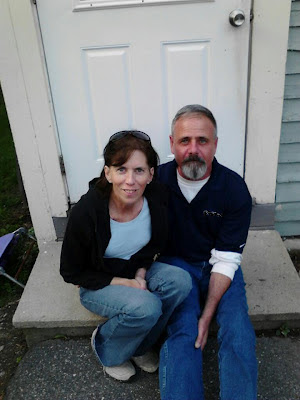 Dave in PB and the sweetest girl I know Miss Cindy
I'm taking the Girls to Hampton Beach for the weekend. I intend to have my backside in the sand by 1000 hours. If you're around and would like share a beer ... We'll pouring beer at Wally's around 1400 hours. Ocean Blvd and L street.
My escape from California is complete.
Posted by Dave in PB at 2:18 PM 3 comments: 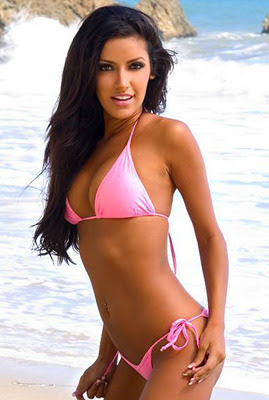 Mercedes Terrell
Posted by Dave in PB at 9:34 AM No comments:

At The Corner of OMG and WTH Street

via The Daley Gator
A woman visited a Stewart’s Shop and Curtis Lumber within a few minutes of each other Tuesday – with no clothes on. “Have a good day,” the woman told one lumberyard employee as she traipsed out. Curtis Lumber manager Bob Eakin, who was not at work at the time, said the woman asked a couple of employees what time it was before she left. 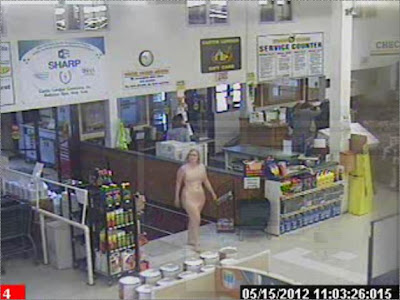 Sister, I'd check my watch but i'm thinking it's time to put some clothes on.
Posted by Dave in PB at 11:48 AM No comments:

Ever Had One of Those Days

Nature is trying to kill you 24/7, no matter how cute you are.

[Al Ahram] The EU Naval Force (EU Navfor) said it had carried out an overnight raid on Somali pirate targets using helicopters and surveillance aircraft. The Somali-based pirates responded by threatening to kill crew being held on more than a dozen hijacked vessels if they were attacked again. It was the first time EU Navfor had taken its fight against the pirates to Somali soil since its mandate was expanded earlier this year to allow strikes on land as well as sea. At risk are more than 300 hostages of various nationalies held by the pirates, who have so far generally refrained from killing crew as they seek multi-million dollar ransoms. A Somali pirate who identified himself as Abdi told Rooters a helizaped the central Somali coastline near Hardhere, a known pirate haven. "An unidentified helicopter destroyed five of our speedboats early in the morning. There were no casualties. We were setting off from the shore when the helizaped us. We bravely ran away without counter-attacking," he said. "If we are attacked while with hostages, we shall take any necessary step to save ourselves, we may also kill the hostages if we miss other options to survive," Abdi told Rooters.

via Hookers and Booze

Put the Cold Drinks Down First

Swallow or Discard whatever is in your mouth Then Go Here
Posted by Dave in PB at 9:38 AM No comments:

All That for a Flag

Yes Michelle
Posted by Dave in PB at 8:28 AM No comments:

via AOSHQ Sidebar
Translation Unnecessary
Posted by Dave in PB at 7:57 AM No comments:

via American Digest
and Happy Mothers Day
A Thousand Years
Posted by Dave in PB at 9:37 AM No comments: 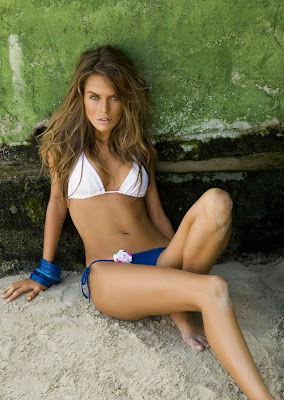 Marila Moreno
Posted by Dave in PB at 8:46 AM No comments:

ELIZABETH, Pa. (AP) — Police say an 84-year-old western Pennsylvania man wounded a home invasion suspect with the gun he carried in the Korean War. Elizabeth Township police say 25-year-old Raymond Hiles was captured not long after trying to break into Fred Ricciutti's home early Tuesday morning. Ricciutti tells WPXI-TV (http://bit.ly/JdVDJ1 ) he heard Hiles break a window and then confronted him, firing a single shot that grazed Hiles' neck. Investigators say Hiles was arrested a few blocks away, carrying a screwdriver and a stun gun. He's being held on $100,000 bail on charges including criminal trespass and burglary. Online court records don't list an attorney for Hiles. Authorities say they don't expect to bring any charges against Ricciutti.

That's What I'm Talking About

Via Nice Deb
House Republicans Play Hardball – Cut Justice Department Salaries Until They Answer Some Questions
Posted by Dave in PB at 7:41 AM No comments:

Red Sox Win One
Posted by Dave in PB at 6:44 AM No comments:

via Peace or Freedom
Kate Upton doing the Cat Daddy and getting very wiggly Because nothing gets more clicks than Kate Upton in a bathing suit.
You're Welcome.
Posted by Dave in PB at 1:27 PM No comments:

via FB Friend Cat
Posted by Dave in PB at 1:02 PM No comments:

via NoOneOfAnyImport
Posted by Dave in PB at 12:56 PM No comments:

It's Whittle via Adrienne
As Usual He's Brutally Honest
Posted by Dave in PB at 11:37 AM No comments:

The Most Awesome Commercial Evah!

Ted Nugent take apart this cBS lunkhead.
Posted by Dave in PB at 2:37 PM No comments:

Anna Kournikova
Posted by Dave in PB at 10:23 AM No comments:

Junior Seau
Posted by Dave in PB at 11:22 AM No comments:

via The Looking Spoon
Posted by Dave in PB at 2:18 PM No comments:

Weather From the Bunker 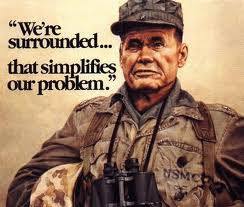 It's Crap. Followed by continued Crappiness and more Crappiness expected for the weekend.Get over it. Have a nice day!
Posted by Dave in PB at 6:38 AM No comments:

Dave in PB has arrived at the secret bunker in New England
Posted by Dave in PB at 10:17 AM No comments: