Starting off here by appealing for people to give to help Texas in the wake of Hurricane Harvey.  Helping each other is part of what makes this world bearable.  In my case, I am driven to it by Tikkun Olam – the Jewish commandment to “Heal the world”.  I’ve given.  I personally recommend the Salvation Army because they have low overhead and do great work.


(Family just got back, so with apologies, no essay this week.)

What We Believe Part 3

THIS is America.  People helping people.  I don't know what country
these Leftists live in, but I don't want to be there: 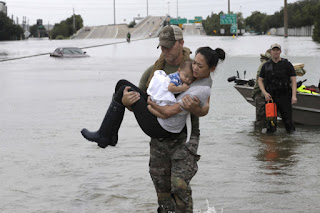 DailyWire - Houston Is The Best Of America. Berkeley Is The Worst. Here's Why.
and
Common Cents - In one sentence this man captures the Spirit of Texas
** And also related to the picture:
Heavy - The Cajun Navy: 5 Fast Facts You Need to Know
** And yet, what are people doing to those who come to save them?

PJ Media - The Left Turns on Christopher Columbus, Repeating KKK ‘Black Legend’ Myth
** They want all of Western Civilization.  Don’t ever doubt it.  Spot-on related:
NSW News - Vandals deface Hyde Park statues in Australia Day protest
** And defending Christopher Columbus, long a target of the Left’s Ministry of Truth:
AmericanPowerBlog - Italian Americans Rally to Keep Christopher Columbus Statue (VIDEO)
** Channeling my “Inner Viking”: it would sure be delicious schadenfreude to see some “made men” contributing to the disappearing of some Antifa people.  Supporting my conviction that this Antifa thing is to destroy Western Civilization:
Liberty’s Torch - What Will It Take?
** Quote:
The monuments under attack are, of course, only symptomatic in the larger scheme of things. The Left’s whole effort is aimed at detaching the young from the history of these United States, especially its founding principles, its seminal struggles, and the words and characters of those who articulated them.


The “Antifa” and “Black Bloc” thugs attacking peaceable patriotic gatherings have the same end in view. There’s no way to separate a people from its history if they’re allowed to talk about it, or any element of it...especially the Founders’ emphasis on freedom of expression.
** And related to that:
LegalInsurrection - Journalist amid Antifa Berkeley Riots: “Police have completely disappeared … People getting beaten up”
** They were chanting "No Trump, no Wall, no USA at all."  Here are their roots: 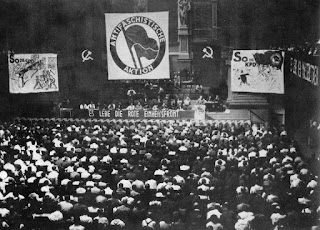 
LegalInsurrection - Egypt-themed fraternity party sacrificed on altar of “cultural appropriation”
** The goal is to so terrify and intimidate nobody ever speaks or does anything not within the constraints the Left has created.  Related:
DailyWire - Police Show Up When Conservative Nebraska Student Places Her Table Outside Of 'Free Speech Zone'
** No Leftist group will ever have to contend with this.  More:
Director Blue - IS THERE A FIRST AMENDMENT OR NOT? Time for the Federal Government to Crush Antifa
** Quote:
Freedom of Assembly is the first and most important right of the Bill of Rights. Today it is being denied in cities like Berkeley and Portland where local left-wing governments have contrived to deny rally permits while giving the masked thugs of their leftist Antifa allies a blank check to assault those whose views they oppose.

American Lookout - LIBERAL PUBLICATION: African-American Charles Barkley Is A “Black White Supremacist”
** Get back on the plantation, boy! 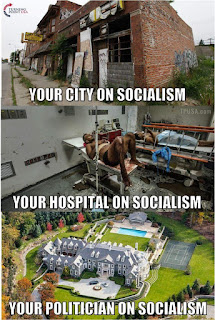 Hot Air - Looks like Italians are largely fed up with the flood of refugees
** I read an internet comment and agree: "Nobody goes from zero to jackboot like the Europeans".  I’m predicting very bad things in Europe, and not far in the future.  My Inner Viking speaks: Turn the boats back; tow them back to Africa with a warning - with a window to give time for word to spread: After Oct. 1, boats coming across will be missiled and the survivors strafed.

New Hampshire Review - Why are Ammunition Prices Dropping?
** I finally got around to actually organizing my stock; have a lot more than I thought.  And still not enough.  Every time I hear a Leftist speak, I buy more.  And I’ve got to pay more attention to local gun shows… 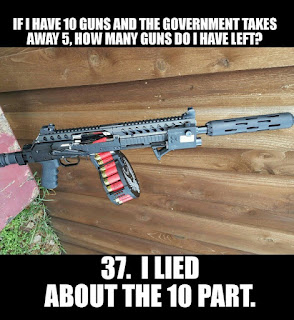 A joke seen on the internet; likely invented but no less true – or applicable – for that:


Q: Why do the Lithuanians oil their flower beds?
A: To keep their guns from rusting.


City Journal - Liberals, Shipwrecked
** A book review; looks interesting.  Definitely worth reading, and a quote:
This rejection of the very idea of an impartial dialogue is, Lilla believes, how the noble legacy of “large classes of people—African-Americans, women—seeking to redress major historical wrongs by mobilizing and then working through our political institutions” gave way, by the 1980s, to “a pseudo-politics of self-regard and increasingly narrow and exclusionary self-definition.” Inherent in it is identitarians’ “disdain” for the “ordinary democratic politics” of “engaging with and persuading people unlike themselves” in favor of “delivering sermons to the unwashed from a raised pulpit.”


and a little later, the Gold Nugget of Truth:


Seen in this light, identity politics is not a problem for Democrats but a solution to the deeper problem that liberalism doesn’t believe in itself.


Why is this important?  Because the Left is hollow; it only has power from its followers because they are perpetually angry.  They have no arguments, they have no case, they have raw, seething grievances.  If the Left had a center; fundamental principles from which to base policies and argumentation, they’d use them.  They don’t.  “The purpose of power is power” said a character in Orwell’s 1984.  That’s what it’s about – not principles, not anything else.  Power.  And if the movers-and-shakers succeed in defeating the Right, they will then sunder each Leftist group.  Divide and conquer – it’s what they do.

Gay Patriot - How fake is CNN? At least this fake
** The author makes the #fakenews point, but IMHO misses the larger picture: The willingness of Leftists, not just Left organizations like the Communist News Network, to lie, but the willingness of individual Leftists to lie in the service of The Faith.  This is the danger we on the Right are STILL not grasping: they will lie, openly, brazenly about what they plan, and what they are doing.


Free Beacon - Average Transgender Soldier Unable to Deploy for 238 Days
** I know a couple of M-to-F transgenders; worked with one for a couple of years.  Overall, nice people – just “regular folks” IMHO.  But one, I happened to have glanced, had a veritable pharmacy of prescription medications in her (and yes, I refer to both as “her”) purse.  The other had to take a couple of weeks off for surgery to “correct things” from prior surgeries.  What this transgenders-in-the-military move was, was simple: create a “right” out of thin air to have the US taxpayer pay for these peoples’ medical treatment, knowing that if a Republican came to power the reversal of that could be used as another divide and conquer move to create (see the City Journal entry, above) more anger to fuel the Left’s shock troops.  (And if it stood had Killary been elected, it would have served the other desired-by-the-Left role of weakening America: diverting military money from guns, bombs, and general readiness, and demoralized those soldiers still remaining.)  Related:
The Federalist - Dear Trans Lobby: The Military Is Not A Social Experiment
** Quote:
In such a scenario (and this Iraq veteran’s tweet storm is an example), a man shouldn’t be confused about his identity, have divided loyalties, or be ridden with anguish, guilt, stigma or hatred for country or a cause he is fighting for. Military is no place for feelings. You don’t question, reason, or argue about whether the causes of the war are just, you fight for your country, to win. If one isn’t sure about his sex, how can he be sure of his loyalty about which country, organization, or ideology to fight for?
>> The military has two purposes:
1. Kill people and blow sh*t up
2. Threaten other people with #1 so they don’t mess with us
ANYTHING THAT WEAKENS THE ABILITY TO DO THE ABOVE IS NOT RELEVANT TO THE MILITARY!!!!!

Althouse - Are you watching the TV news about Hurricane Harvey hitting Texas?
** Quote:
Please give me credit if I've said it first: They're less worried about Harvey hurting Texas than they are delighted that at the prospect of Harvey hurting Trump.
>> Everything – everything – is looked at as a tool to divide, conquer, and create anger to keep people from uniting (as far as the Left’s enemies are concerned), and thinking (as far as the various interest factions supporting the Left).  Look at every single thing the Left does through that filter and what they do makes perfect sense.


90 Miles - Proof Of Donald Trumps Feelings Towards Minorities!!
** Funny how Donald Trump only became a RAAAAAACIST!!!!! when he stood in the path of the Left’s juggernaut. 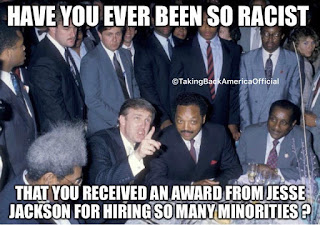 It Ain’t Holy Water - Highlights of Alt-Left / AntiFa Violence at Berkeley 'Rally Against Hate...
** Just feel the love and tolerance.  Not. 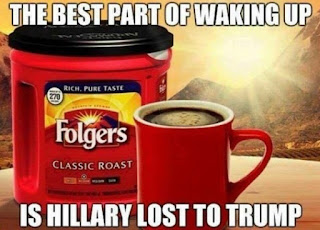 Townhall - How The Left Gets Away With Unlawful Discrimination
** Quote:
Two examples being the Washington Post and the Boston Globe. Two far-left "newspapers" which were put up for sale in the last decade and bought for a fraction of their peak value by ultra-wealthy liberal investors.


Two newspapers which now daily use their hundreds of politically-correct, liberal-group-think hires to attack President Trump, Republicans and conservatives.


To be clear, the last thing I would want is for conservative investors to purchase those newspapers — or any media outlet — and turn them into conservative propaganda rags. I don't want to read "conservative" bias in news copy any more than I want to read "liberal" bias in news copy. I just want honest news.
>> Two comments:
1. Yes; as instapundit’s Glenn Reynolds advocates, we Conservatives need to buy some of these information-purveyors and start getting our perspective out into the mainstream.
2. I don’t want propaganda, but we NEED to shatter the uniformity of left-left-left that people intake.

Posted by NITZAKHON at 5:43 AM