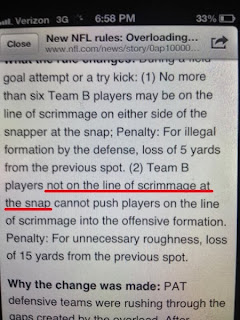 Via Jeff Howe of the Boston Herald, Belichick said after the game that he “disagrees with the penalty for pushing,” and that “there wasn’t a push in the second level that would require a flag.”


Belichick made his comments at his post game presser at around 5 o’clock. In the ensuing confusion, the NFL’s official site made an edit on a post about the rule that was first posted a month and a half ago:

Approx 1.5 hours later the rule is changed to match the circumstances of the referees call. Appears an update was made at 6:29 PM

And like magic, the part about players not on the line of scrimmage at the snap was mysteriously gone:
As a result of the refs call the Jets are awarded a new set of downs and another chance at a field goal closer in to the goal posts.