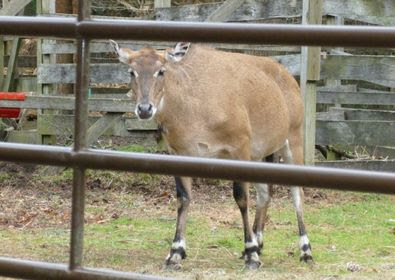 Unfortunately for her, she looks like a big brown deer with no antlers. Rhode Island Environmental Management Services say the owner does not have a permit to keep these animals at the remote Rhode Island farm in Hopkington. Arrangements had been made to send the animals to the Black Beauty Ranch in Murchison,Texas farm for safe keeping. One of the animals broke free of her pen and escaped into a heavily wooded area surounding the farm.

State veterinarian Dr. Scott Marshall of the Rhode Island Department of Environmental Management says he and other DEM officials were supervising the preparation of the antelope and others Monday at a farm in the Woodville - Alton Road section of Hopkinton.

"They were making preparations to ship the animals to a sanctuary in Texas and she became spooked, when we had to dart her to read her TB test and to get her onto the trailer," said Dr. Marshall. "So, she crashed through a fence and went into the woods, and the woods are very thick in the area and we haven't been able to find her."

WARNING from the RHODE ISLAND DEPARTMENT OF ENVIRONMENTAL SERVICES:
The DEM issued an advisory at about 2:30 Tuesday warning that the sedative "administered to the animal could cause harm or possibly death to people if flesh from this animal is consumed." Dr. Marshall identified the sedative as Xylazine, which he said is commonly used by veterinarians to sedate large animals.

The DEM also posted warning signs that include photos of the animal at the nearby Black Farm State Management area.

UPDATE: So according to this Field and Stream map we're into Peak Rut in Southern New England. Can one of you Environitwits tell me when we might expect some overly large antlerless whitetails here in the North and Easterly realms?
Posted by Dave in PB at 4:53 AM