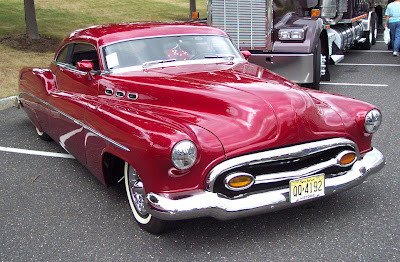 Every account of Buick in those days invariably mentions the origin of the porthole, which -- variously bent, squeezed, elongated, wiped out, and restored again -- has been part of the Buick styling tradition since '49. It was part of that design lexicon, which took inspiration from the wonderful new jot aircraft (the basic Buick shape had evolved from the propeller-driven Lockheed P-38), along with the rounded "fuselage" of car body sides, the big scoop grilles, and the aileron-like tailfins. (Buick's first "fins" came in 1952, well ahead of Virgil Exner and Chrysler.) When Nickles whimsically mounted little colored lights inside the portholes of his own Roadmaster, wired through the distributor to flash in firing order, Flint managers stared at it wide-eyed in open admiration; the wonder is that they didn't make it standard.
Specs
Posted by Dave in PB at 1:36 PM