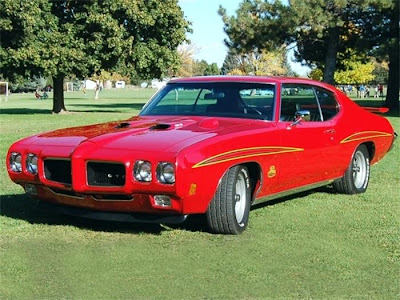 The 1970 GTO could be had with engines displacing up to a full 455 cubic inches. The basic 455 was rated at "only" 360 hp, but it made a stout 500 pound-feet of torque. That's more twist than in any previous GTO, and other driveline components were strengthened to withstand the punishment, including the adoption of GM's "12-bolt" rear end. The 455 was also available with Ram Air, though it wasn't part of the Ram Air III and Ram Air IV family (both of which continued in '70 on the GTO in 400 cubic-inch form, with the III rated at 366 horses and the IV at 370). The two-barrel 400 was excised from the GTO program for '70, and the base engine became a 350-horse 400 four-barrel.

As the 1966 GTO's body was a revision of the '65's, so too was the '70's an extensive reworking of the '69's. It had the same dimensions and window shapes, but was more voluptuous in the details. The new front end took the four headlights out of the grille area and set them in deep bezels to either side. The front bumper continued to be made of the color-keyed Endura material.
Posted by Dave in PB at 7:18 AM