Bad Day to be a Skunk. 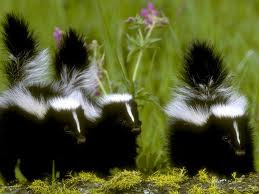 I'm not sure if it was the full moon overnight but it looks like our local family of Skunks has committed suicide by car. Usually we just leave em alone. They come through the side yard to get to the creek for water. They must have been out looking for food and got splashed. Shame.

UPDATE: Mama Skunk was seen in the side yard last night with one little skunklet in tow

In Other News
SAN DIEGO ---- A 75-year-old man confessed Saturday to robbing a Clairemont Mesa bank branch twice in the past month, according to the San Diego Police Department.
But San Diego police made it clear that their 75-year-old confessed robber was not the "Geezer Bandit," an elderly man who is believed to have robbed 16 banks across California in 30 months, most recently a week ago in San Luis Obispo.
Police said Albert Wallake walked into the U.S. Bank location at 5407 Balboa Avenue about 10:25 a.m. and told the manager he was turning himself in for the past armed robberies, which occurred Dec. 2 and Nov. 15. The bank's manager called police and Wallake was arrested without incident, police said.