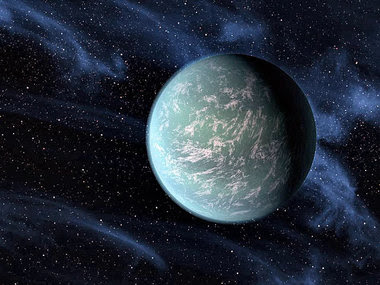 WASHINGTON (AP) -- A newly discovered planet is eerily similar to Earth and is sitting outside our solar system in what seems to be the ideal place for life, except for one hitch. It's a bit too big.
The planet is smack in the middle of what astronomers call the Goldilocks zone, that hard to find place that's not too hot, not too cold, where water, which is essential for life, doesn't freeze or boil. And it has a shopping mall-like surface temperature of near 72 degrees, scientists say.
The planet's confirmation was announced Monday by NASA along with other discoveries by its Kepler telescope, which was launched on a planet-hunting mission in 2009.

Gather up all your environitwits and go. Don't come back. Nice knowing you. Don't bother writing. Have a nice time.
Oh ... BTW there might be people already there that don't like you either.
Posted by Dave in PB at 7:21 AM