John William Finn has Passed Away 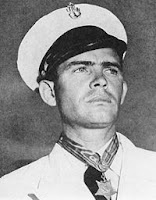 Dave_in_PB Sez: John Finn had been America's oldest surviving recipient of our Nation's Highest honor. He had been awarded the Congressional Medal of Honor for his actions during the attack on Pearl Habor. Mr. Finn passed away the other day, May 27th 2010. He was 100 years old.

By December 1941, Finn was stationed at Naval Air Station Kaneohe Bay on the island of Oahu in Hawaii. As a chief aviation ordnanceman, he was in charge of twenty men whose primary task was to maintain the weapons of a PBY Catalina flying boat squadron. On the morning of December 7, 1941, Finn was at his home, about a mile from the aircraft hangars, when he heard the sound of gunfire. Finn recalled how a neighbor was the first to alert him, when she knocked on his door saying, "They want you down at the squadron right away!", he drove to the hangars (seeing Japanese planes in the sky on the way) and found that the airbase was being attacked, with most of the PBYs already on fire.[1][4][3]

His men were trying to fight back by using the machine guns mounted in the PBYs, either by firing from inside the flaming planes or by detaching the guns and mounting them on improvised stands. In 2009 Finn explained one of the first things he did was take control of a machine gun from his squadron's painter. "I said, 'Alex, let me take that gun'...knew that I had more experience firing a machine gun than a painter."[4][3]

Finn then found a movable platform used for gunnery training, attached the .50 caliber machine gun, and pushed the platform into an open area, from which he had a clear view of the attacking aircraft. He fired on the Japanese planes for the next two hours, even after being seriously wounded, until the attack had ended. In total, he received 21 distinct wounds, including a bullet through the foot and an injury which caused him to lose feeling in his left arm.[1]

"I got that gun and I started shooting at Jap planes," Finn said in a 2009 interview. "I was out there shooting the Jap planes and just every so often I was a target for some," he said, "in some cases, I could see [the Japanese pilots'] faces."[4]

Despite his wounds, he returned to the hangars later that day, after receiving medical treatment, and helped arm the surviving American planes.[1][3]

For these actions, Finn was formally presented with the Medal of Honor on September 14, 1942, by Admiral Chester Nimitz. The ceremony occurred in Pearl Harbor on board the USS Enterprise (CV-6).[1][3]

During the remainder of World War II, he served as a Limited Duty Officer Ensign and eventually as a Lieutenant with Bombing Squadron VB-102 and aboard the USS Hancock (CV-19). He retired from the Navy in the rank of Lieutenant in September 1956.[3]