A Thanksgiving Toast To The Old Breed by Victor Davis Hanson - Vanderluen -- American Digest
They gave us a world far better than they inherited.

The late World War II combat veteran and memoirist E. B. Sledge enshrined his generation of fellow Marines as “The Old Breed” in his gripping account of the hellish battle of Okinawa. Now, most of those who fought in World War II are either dead or in their nineties.

Much has been written about the disappearance of these members of the Greatest Generation—there are now over 1,000 veterans passing away per day. Of the 16 million who at one time served in the American military during World War II, only about a half-million are still alive.

Military historians, of course, lament the loss of their first-hand recollections of battle. The collective memories of these veterans were never systematically recorded and catalogued. Yet even in haphazard fashion, their stories of dropping into Sainte-Mère-Église or surviving a sinking Liberty ship in the frigid North Atlantic have offered correctives about the war otherwise impossible to attain from the data of national archives.

More worrisome, however, is that the collective ethos of the World War II generation is fading. It may not have been fully absorbed by the Baby Boomer generation and has not been fully passed on to today’s young adults, the so-called Millennials. While U.S. soldiers proved heroic and lethal in Afghanistan and Iraq, their sacrifices were never commensurately appreciated by the larger culture. 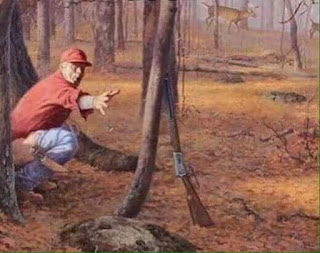 Home Invader Regrets Kicking Down Door Of Gamer Geek -- hellinahandbasket.net
Sometimes It will always be about using the tools you have effectively, fighting your way back to your primary weapon and surviving.

I suppose the moral to this story would be this: Do not allow yourself to be the victim. Make your attacker be the victim then be the good neighbor that you are and call the ambulance for him.

One of the most Insightful commentators on Twitter, Educating Liberals, has published a thread of his theory on this whole Impeachment micheghas:

“Does anybody on Twitter actually know how impeachment works?

So let me explain why Trump WANTED to be impeached….

If the Judiciary Committee calls for a vote, & a simple majority of the House agrees, it goes to a trial in the Senate.

The Senate then requires a two-thirds majority to convict him.

And what crime has Trump committed?

NONE. Also, the Republican Party holds a 53-47 majority in the Senate, so there won’t be enough votes.

The Senate trial is the REAL TRIAL.

Trump will have his own lawyers putting on his defense.

And he’ll declassify everything he needs to in order to defend himself.

A trial in the Senate would lead to the exposure of everything the media has tried desperately to ignore.

Every news outlet will be forced to cover the trial daily.

And the country will see evidence of unprecedented criminality committed by the Dems.

If Trump goes on trial, he’s going to expose every single crime the Dems have committed going back to January of 2009.

and this happens... Like my (late) mother before me, I've been diagnosed with Stage 3C ovarian cancer. We won't know precisely what type, or what the tumour grade is, until after surgery on November 15.

I honest to goodness do not know what to say.
GOD Bless her and keep her safe.
Posted by Dave in PB at 2:09 AM