Can Pretty Girls Hack the Duty 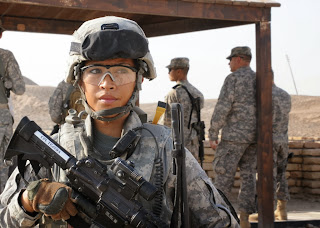 Can you tell if this soldier is wearing makeup


Honestly, I believe women should not be considered at all for combat roles. Three women have already completed Marine infantry training and will graduate today. I have no idea if these women are pretty or not so pretty or if they wear makeup. It doesn't matter. They have completed the course and have been found competent. These women will not be assigned to infantry units. Thank you in Advance for that. Women do not belong in combat units having been qualified or not.

Army Col. Lynette Arnhart, who leads the team of analysts considering what combat roles to open to women, sent an email indicating that images of “nice looking” female soldiers could undermine their communication strategy, Politico reported, after obtaining a copy of the email.

The colonel included an attachment of an article that recently ran in Army Magazine. The woman photographed was shown wearing makeup on a deployment. She said some might question whether the woman in the photo could hack it in the warzone.

“Such photos undermine the rest of the message (and may even make people ask if breaking a nail is considered hazardous duty),” Arnhart wrote.

She suggested that using a photo of a female soldier with mud on her face “sends a much different message — one of women willing to do the dirty work necessary in order to get the job done,” Politico reported. But the photograph in question wasn’t one shot in a studio somewhere — it was a photo of an actual soldier, Cpl. Kristine Tejeda, with 3rd Brigade, 1st Cavalry Division, while she provided security in Iraq in 2011.

Still, her message was forwarded on by the chief of public affairs for the Army’s Training and Doctrine Command, or TRADOC, Politico reported. He forwarded it to all public affairs officers with the command.

“A valuable reminder from the TRADOC experts who are studying gender integration — when [public affairs officers] choose photos that glamorize women … we undermine our own efforts,” he wrote. “Please use ‘real’ photos that are typical, not exceptional.”

Marine Corps Times checked in with Marine Corps public affairs to see whether they’ve received similar guidance surrounding their Women in Service Review. Capt. Maureen Krebs, a Marine spokeswoman at the Pentagon, said the guidance they’re giving is to take a responsible, deliberate and measured approach as they conduct their review.

“There has been no public affairs guidance given regarding photos,” she said.