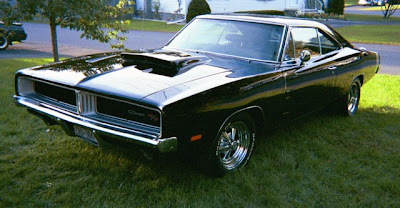 1969 Dodge Charger
The 1969 Dodge Charger presented perhaps the widest array of choices in the history of the nameplate. There was a base model, an available SE (for "Special Edition") option that heaped on more luxuries, a hot-performing R/T version, and two wild race-bred iterations: the 500 and the Daytona. Engine selections started with Chrysler's trusty 225-cid Slant Six, but also included five V-8s, topped by the rollicking 425-horsepower 426-cid "Street Hemi." Depending on the model, available transmissions were three- and four-speed manuals, plus the excellent three-speed TorqueFlite automatic.

Given all these choices, it's perhaps ironic that the car came in just one body style, a two-door hardtop. The 1969 Dodge Charger was an update of the completely restyled '68 model, which meant it was built on a 117-inch wheelbase with Chrysler's familiar torsion-bar suspension up front and leaf springs in the back. New styling touches for base and R/T Chargers included a vertical center divider in the grille and horizontal taillights.
Posted by Dave in PB at 8:11 PM