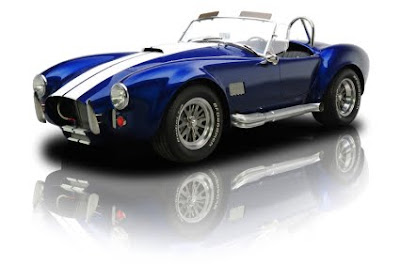 1965 Shelby Cobra Roadster
In 1963, the Shelby Cobra roadster had already proven itself by smashing the Corvette on the short tracks of America. Shelby also took the roadster to Europe and prepared a hardtop version for Le Mans but placed 4th in class behind the Ferrari GTOs. The turning point came with the Daytona Coupe, a hand-made supercar that would put America at the forefront of sports car racing.

Convinced by Pete Brock, Shelby gave the go-ahead to rebody his 289 Cobra to include a closed cockpit for better aerodynamics. This resulted in a Cobra having a much lower center of gravity and less aerodynamic drag. By October 1963, early tests at Riverside showed positive results with 186mph which was some 20 mph more than the 286 Roadster.

Dave MacDonald and Bob Holbert had the honor of debuting the Cobra Daytona at the 1964 Daytona Continental. The race itself looked promising, with the coupe dominating the first half of the race until a fire in the pits forced the team to retire.

Three weeks later, Shelby American returned to take on the 12 hours of Sebring with the same drivers as Daytona. They beat Ferrari and placed fourth overall leading the GT class. Ford immediately decided to offer Shelby financial backing to assault European GT racing. At this time Ford was very anxious to win on international fronts and was in the midst of creating the GT40 when an attempt to buy Ferrari went sour.

Another coupe was prepared for the 1964 European season and subsequent body production was enlisted to Carrozzeria Grandsport in Modena, Italy.

Cobra Daytonas achieved the fastest GT class time at the Le Mans test weekend and it was a sign of things to come. CSX2299 took the GT-class victory with Dan Gurney and Bob Bondurant at Le Mans infront of several Ferraris. For the rest of the season, competition was fierce with Ferrari and the Monza Coppa Inter-Europa at Italy looked to decide the championship. Unfortunately, the event was canceled with Ferrari leading by just a few points. This season remains as one of the great 'what ifs' in Cobra history.

None-the-less, Shelby remained determined in 1965 and four more complete cars came from Carrozzeria Grandsport before the start of the season. The absence of company-supported Ferraris allowed Shelby win almost every race in Europe and the first Shelby became the first American team to win the European GT manufacturer's title.

Meanwhile, Shelby was busy in America fitting the big-block Ford engine into a 427 Super Coupe. Only two prototypes were made until focus shifted to the ailing GT40 program.

Story by Richard Owen
Posted by Dave in PB at 3:05 AM