to Red Sox Nation
On the eve of former Boston Red Sox third baseman Kevin Youkilis' emotional return to Fenway Park, he penned an open letter to Red Sox Nation to express his appreciation.
Kevin Youkilis spent 8 1/2 years with Boston before he was traded to the Chicago White Sox on June 24. 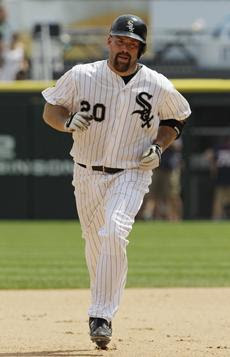 
What an amazing run I have had these past 8 1/2 years in Boston! It has been an honor and a privilege to play every home game of my career in Boston before a sold out Fenway Park. I would like to thank everyone who gave me an opportunity in Boston, and stood behind me through all these years. To the Spinners, the Sea Dogs, the PawSox, and to all those teammates on the Red Sox since 2004, I am forever grateful. I want to thank the Red Sox ownership for all the hard work and dedication to making the Red Sox and Fenway Park a special place to play. They have always supported me on the field, and have helped out in many ways off the field. I can't thank them enough for my time in Boston. To Terry Francona, who led us to 2 World Series championships in 2004 and 2007, I thank you for your support and personal guidance through my career with the Red Sox. I thank you for being there for me not just as a manager but as a friend off the field. Thank you for the opportunity to play in 3 All-Star Games, winning 2 World Series, winning the Hank Aaron Award and a Gold Glove. I could have never accomplished all this without all my great teammates and coaches who made me a better player. I want to thank my parents and brothers for all their support from the day I got drafted. Without my Dad's hard work building that batting cage, and my Mom tirelessly schlepping me around to all my games, I would never have lived my dreams in Boston. I want to thank my beautiful wife Julie and all her family for all their support. We will always cherish Boston since it was the city in which we met and married. I also want to thank all the philanthropic people around New England and across the country who supported my charity in the past and continue to support Youk's Kids. Since its inception, we have raised over $3 million to support the neediest of children in Red Sox Nation. While my days of playing for the Red Sox have ended, I am still committed to serving the New England area through my charity. I thank all the charity's sponsors for all they have done, and their continued support going forward. And, last but no means least, to all the Red Sox Nation, the home of the most dedicated and knowledgeable fans in baseball, I thank you from the bottom of my heart. That final game at Fenway was the most emotional day of my life on the baseball field. It could not have been scripted any better. And to all those kids out there in Red Sox Nation, I can give you my Dad's advice. "Life is like a throw to first base, always aim high."
I love you all, and thanks,
Kevin Youkilis