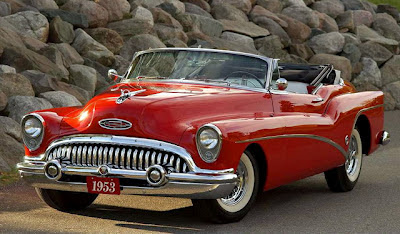 1953 Buick Skylark
To celebrate its 50th anniversary, Buick released a limited edition model as a present to itself and the public. That birthday Buick was named the Skylark and it was the head-turning convertible, only available for two years, that would go down in history as one of the most sought after luxury classics of all time. General Motors released two other limited-production convertibles that year—the Oldsmobile Fiesta and the Cadillac Eldorado—but the birthday Buick stole the show. LINK
The Buick Skylark was the work of Harley Earl and took its styling cues from Earl's XP-300 experimental LeSabre. The Buick Skyark continued Buick's desire to build mid- to upper level automobiles with great quality and design. Buick took almost all optional equipment and made them standard on the Skylark. The Skylark sat perched on the Roadmaster chassis and given a 322 cubic-inch Fireball V8 capable of producing 200 horsepower. The engine was mated to a three-speed Dynaflow automatic which sent the power to the rear wheels. Four-wheel hydraulic brakes provided the stopping power. LINK
Posted by Dave in PB at 7:11 AM