via DougM at KISPPoints to this Epic Gun Safety Fail.

A Des Moines family evacuated their apartment on Friday night after gunfire came through their ceiling, apparently fired from the apartment above. [They] were in the living room of their apartment with their two kids when they heard a noise that sounded like a firecracker. [He] saw that the television was damaged and surrounded by debris. One of the children then pointed out two holes in the ceiling above, prompting the family to leave the apartment. [W]hile clearing the apartment, officers found debris from a couch in the living room and a hole through the floor. In a bedroom, officers found a bag of marijuana, a narcotics pipe and a grinder. [P]olice found a … 12-gauge shotgun, as well as five rounds of shotgun slugs. A spent shell casing was also found under the seat. The female resident … told police that she had been sitting on the couch while her boyfriend, who had the shotgun in his hands, was sitting at the other end. While he was holding it, she said, the gun went off. [S]he and her boyfriend both left the apartment after the gun went off. They were both afraid that police would come to arrest them ….

Yep ... Epic Fail
1.All guns are always loaded!
2.Never let the muzzle cover anything you are not willing to destroy!
3.Keep your finger BoogerHook off the trigger Bangswitch until your sights are on the target!
4.Always be sure of your target! Oh and more importantly what's behind your intended target.

Unc would go further, I'm sure, lecturing on the subject of Negligent Discharge of a Firearm. Whatever else happens to this pair of nitwits, This Kind of Stupid should be Painful. Fortunately in this case, no one was injured.

One more thing ... These are not the same. 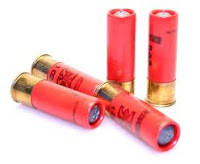