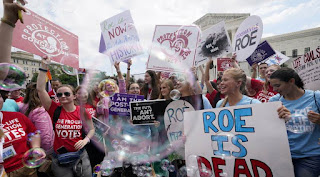 Recently, in the wake of the Roe v. Wade controversy, my wife Janice Fiamengo published an article for PJ Media asserting that abortion-on-demand is by no means a question of male compulsion but involves the responsibility of the woman herself as a person who possesses individual agency, who can choose whether or not to abort her unborn. A woman is not the helpless victim of ostensive patriarchal domination but a free and responsible agent who can determine her own actions rather than malinger as a servile casualty of male oppression. To think otherwise is merely demeaning, a way of infantilizing and exculpating women for their own decisions.

I’ve received many comments from correspondents who, while agreeing with the tenor of Janice’s arguments, felt that — to cite just two responses — few people are concerned “about this issue with all the dysfunction around us in vastly more important and relevant areas of life,” and that the abortion discussion is “a complete distraction and waste of time [considering] the far more consequential issues of our time.” In my estimation, such reactions bespeak a basic misunderstanding of the matter.

The subject of abortion remains central to the “discussion” since it is the Left’s fundamental sacrament, the hill they don’t intend to die on but to successfully defend in any way they can, legally or illegally. The Bible has warned against this obscenity. The slaughter of the unborn or the newly born is a pagan rite celebrated by the ancient Canaanites who worshipped Moloch, a devouring god venerated by a people for whom life was not a Divine gift. One need not be a believer to take seriously the admonition of Leviticus 18:21: “And thou shalt not let any of thy seed pass through the fire to Molech, neither shalt thou profane the name of thy God: I am the Lord.” Similarly, the “hilled site” on which the Left is encamped is the contemporary version of the biblical Topheth, razed by King Josiah so that “no one might burn his son or his daughter as an offering to Moloch” (2 Kings 23:10). The secular will scoff, and the “idolatrous priests” of the progressivist persuasion will dismiss the injunction as irrelevant, but history bears out the biblical exhortation. Such peoples and nations no longer exist, but Israel, the people of genesis (literally) and the bringers of the Decalogue, has survived.

Liz Cheney just needs to say she is an independent, a Democrat, but she is NOT a Republican, and likely never really was - The Daley Gator

THE EXPERTS ARE FALLING - ACCORDING TO HOYT - Born Free

Cartoon Round Up - Theo Spark

Quick Hits Of Wisdom, Knowledge And Snark - 90 Miles From Tyranny 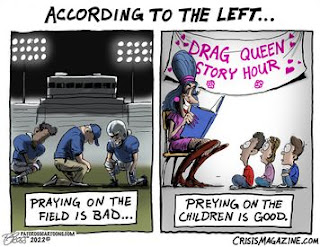 Quote du jour and Best of the Web - Proof Positive