Bostonian of the Year 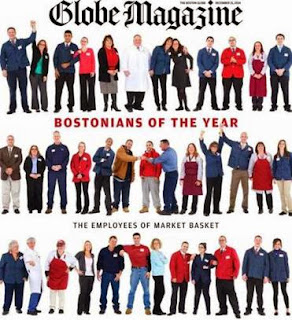 Globe Magazine 2014 Bostonians of the Year

The grocery chain’s 25,000 workers risked their jobs to support a benevolent leader and highlighted that a company formula of low prices and good wages can succeed.

It was a riveting business story that became an even more compelling human interest story. When Arthur T. Demoulas, beloved president of the New England grocery chain called Market Basket, was fired in June, who could have anticipated what happened next? An employee walkout and customer boycott to demand Artie T.’s return, actions that crippled the business and stretched out for six weeks. Arthur T.’s cousin and rival Arthur S. Demoulas, together with his affiliated shareholders, was finally forced to sell the company to Artie T.

The 25,000 employees — many with decades of service and working alongside their husbands, mothers, sons, aunts — showed incredible devotion to a boss and remarkable stamina and determination. They knew their pay and benefits were unmatched in today’s cutthroat world of retail and gambled that if they stuck to their protests, they could emerge victorious. They caught the attention of customers, governors, US labor secretaries past and present, CEOs and business scholars from all over. When the company sale was announced in late August and employees returned to work, the joy was contagious. People who had never shopped a Market Basket before just had to visit to see what the fuss was about.

For showing such pluck and perseverance and power, we’re calling the Market Basket employees our 2014 Bostonians of the Year.