Usually a nice market to get your food shopping done on Sunday after Church, the chain has begun swirling the crapper. (Previously) 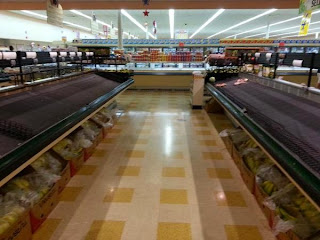 On the Upside, There's Plenty of Parking

Customers at Market Baskets across the state are tweeting and Instagramming the slow meltdown happening inside the supermarket chain’s locations.

If you’ve been living under a rock (or you’re one of those big spenders who gets groceries at Stop n’ Shop), here’s the latest on the battle of wills at Market Basket.

On Friday, workers swarmed the company’s corporate headquarters in Tewksbury, vowing to cut off restocking at individual supermarket locations until the Board of Directors reinstates ousted CEO Arthur T. Demoulas.

Workers made good on the threat, with almost immediate effects felt in the produce and seafood sections of stores, which require the fastest restocking.

The company struck back, hard, firing long-time warehouse manager Dean Joyce on Sunday as shelves continued to empty in locations across the state.

“The actions of thousands of Market Basket employees over the last days have been truly inspiring. They are putting their jobs on the line—with little or no protection from reprisals from current management—to stand up for the simple principle that workers deserve to be treated with respect and their voices deserve to be heard. I hope the current management of Market Basket will respect these voices and that these employees will able to make their case without losing their jobs or their hard earned benefits. Market Basket has been a great employer and community partner for decades and I hope those values are maintained.”