66th Anniversary of the D Day Invasion of Normandy 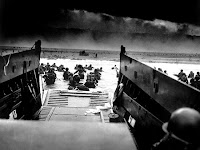 Dave_in_PB Sez: When America puts the Awesome on the line. Thats exactly what you get.

"One of the greatest speeches ever given, in my humble opinion, commemorating the D-Day invasion, was that made by Ronald Reagan on this day in 1984. Take a moment and read it on this, the 67th anniversary of the D-Day invasion to liberate Europe from the Nazis":

"We're here to mark that day in history when the Allied armies joined in battle to reclaim this continent to liberty. For four long years, much of Europe had been under a terrible shadow. Free nations had fallen, Jews cried out in the camps, millions cried out for liberation. Europe was enslaved, and the world prayed for its rescue. Here, in Normandy, the rescue began. Here, the Allies stood and fought against tyranny, in a giant undertaking unparalleled in human history.

We stand on a lonely, windswept point on the northern shore of France. The air is soft, but forty years ago at this moment, the air was dense with smoke and the cries of men, and the air was filled with the crack of rifle fire and the roar of cannon. At dawn, on the morning of the 6th of June, 1944, 225 Rangers jumped off the British landing craft and ran to the bottom of these cliffs. Their mission was one of the most difficult and daring of the invasion: to climb these sheer and desolate cliffs and take out the enemy guns. The Allies had been told that some of the mightiest of these guns were here, and they would be trained on the beaches to stop the Allied advance."