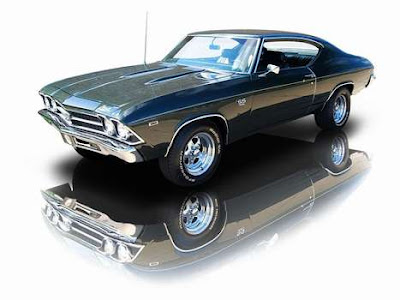 1969 Chevelle SS
The Chevelle SS represented Chevrolet's entry into the muscle car battle. Early 1964 and 1965 Chevelles had a Malibu SS badge on the rear quarter panel. Chevelles with the mid-1965 Z16 option priced at US$1,501 in 1965,[1] had the emblem on the front fender, as well as distinct in-house style numbers, 737 for the hardtop, 767 for the convertible.[2] The $162 Super Sport package was available on the upscale Malibu two-door hardtop and convertible models, the option added special exterior brightwork with SS emblems and the 14-inch full-disc wheel covers from the Impala SS. Inside, the vinyl bucket-seat interior featured a floor console for models equipped with the optional Muncie aluminum four-speed-manual or Powerglide two-speed automatic instead of the standard three-speed manual. Malibu SS also got a four-gauge cluster in place of engine warning lights, and a dash-mounted tachometer was optional. The available 283-cubic-inch four-barrel V8 engine rated at 220-horsepower was the same rating as the 1957 Chevy Power-Pak 283 engine.
Posted by Dave in PB at 10:33 AM