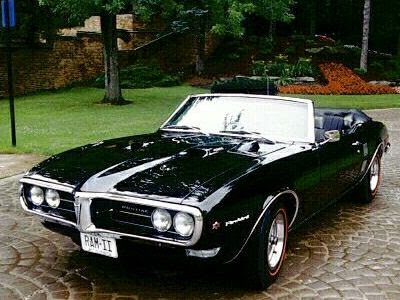 1968 Pontiac Firebird
The 1968 Pontiac Firebird underwent few changes for its second year. The changes Pontiac engineers did make included the loss of the side vent windows that where replaced by a one-piece side door glass window, and the exterior also gained fender marker lights. The interior was revised and the rear suspension was refined with the adoption of staggered shocks and the use of new multi-leaf rear springs. The big news again was under the hood as the standard 400 engine gained another 5 horse to make 330 while the Ram Air engine was rated at 335 hp. In mid year, it was replaced by the 340 hp Ram Air II. Newly available was a a 400 V8, named the HO (High Output) that was between the two other engines. It too was rated at 335 hp. On the other side of the engine line, the 230 I6 was replaced by a new 250 I6 and the 326 V8s were replaced by new 350 V8s. Performance was definitely the key at Pontiac.
Posted by Dave in PB at 12:01 AM